Please visit www.ArtsyPrintsPlus.com for my new animals in clothes - The Hipster Animal Gang 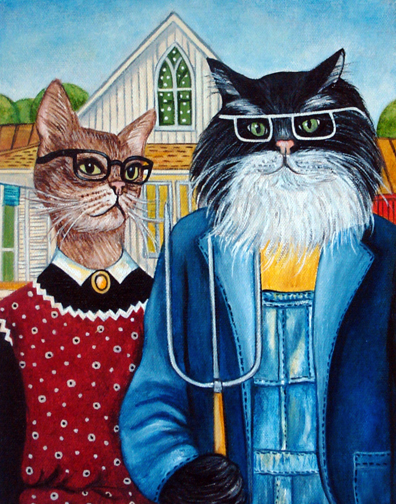 American Gothic is a Painting  by Grant Wood  in the collection of the Art Institute of Chicago. He is an American painter with European training.

Wood's inspiration came from what is now known as the American Gothic House and his decision to paint the house along with "the kind of people I fancied should live in that house." The painting shows a farmer standing beside his spinster daughter. The figures were modeled by the artist's sister and their dentist.

The woman is dressed in a colonial print apron evoking 19th-century Americana,  and the couple are in the traditional roles of men and women, the man's pitchfork symbolizing hard labor. It is one of the most familiar images in 20th-century American Art and has been widely parodied in American popular culture.

This is my depiction being American Feline Gothic. Instead of being the father and spinster daughter, in my panting they are Edward and Catherine a married couple that have worked hard all of their lives and raised many children in the country…and of course they are feline people and not humans!

Google American Gothic and see the images of so many artists that have their own renditions of this painting. Just so funny that I had to do my own.

Email Me Here or use the form below

Posted by Madison Moore at 7:25 AM

Thanks so much for taking the time to leave me comments. Your support is greatly appreciated.

Cats in Clothes Paintings and Commissions

This is so much fun. I can mix my love for cats with my love for fashion all in one series. What could be cuter than Cats wearing clothes? I am sure every cat lover out there will agree with me.

Can you see your cat wearing clothes? Something that meets his or her personalities, A Queen, a King, Cook, a Golfer or Teacher, anything that meets your fancy. Maybe you have a family of cats and would like to have a family portrait. Imagine them all dressed in clothes! How fun! Couples are cute too!

Would you like to memorialize your cat? There is nothing nicer than to have a professional portrait of your beloved pet to memorialize him or her. Something to cherish for a lifetime.

Cats in Clothes Paintings are also great gift ideas! They will make a cherished and unique gift for the pet lover in your life.

Commission projects are welcome in any size and theme you wish.

Please feel free to contact me with your ideas.